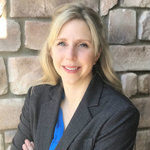 April Maxwell is the owner of Maxwell Law Group. April has experience in appeals and civil litigation, but bankruptcy has her heart.

Prior to attending law school, April received her degree in Zoology from Brigham Young University. April is also the proud mother of 4 great kids and makes a mean cinnamon roll.

April is a member of the following organizations:

Your First Appointment – We Make it Easy

Thank you for contacting us. We will get back to you shortly.

Please complete all required fields below.